Some Snapshots from Latest Trip to Lebanon

I recently came back from Lebanon, where I presented at SHARE Beirut. The conference was one of the most laid back (yet organized), chill, and diverse gatherings I have ever attended. I could go on and on about the conference, the people I met, and Lebanon in general – especially since this time, the country has entered my heart for good (they say third time’s the charm). Yet, a picture is worth a thousand words –  and I believe I could write something more substantive later on.

Most photos were taken in Beirut (Jemmaizeh, Hamra, and Mar Mikhael), Shouf, and the National Arz Forest Reserve.

The note in between.

You never see a shooting star when you’re out there looking to catch it.

Twice in Lebanon. Once outside a church as I sat beneath a statue of Jesus, in the mountain town of Beit Mery. The second was under an anticipative sky in Beit Eddine, Shouf, as I was waiting for a jazz concert to begin filling me with oceans of joy.

The air smelt like blossoming jasmines and Anaïs perfume. Whatever it was, I knew the night was pregnant with possibility.

After the concert, we went to Deir el-Qamar, where we – albeit briefly – stargazed. Outside the Fakhreddine mosque, I understood why the town was called the Monastery of the Moon. The sky was clear and it was impossible to not feel humbled by it.

And sometimes, you carefully define and write down two musical notes just so you can accurately imagine the one note in between. Once you and another human being jointly discover that you imagined the same note, something Big is meant to happen. Something just as Big and infinite as that very same sky. 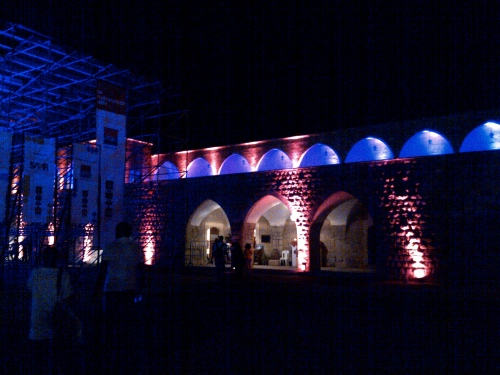