Ghar el-Melah on a cruel (but kind) August afternoon.

There was an inexplicable unity in all things I breathed, all things I saw. My eyes were hungry. My soul, thirsty. Climbing the hill as I fought the rays of the sun (which felt like invisible swords cutting through my body), I knew it would be worth it. From fire, to cool breeze. I would find it. I have to.

The weeds were long and the thorns poked at my legs, threatening greater action if I stepped any harder on the Earth. I complied and stepped lightly. Up, up. Beads of sweat formed on my neck, my forehead. A mini river was in the process of formation down the topography of my back. I was almost there. 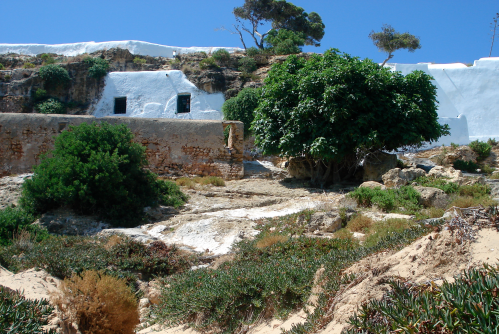 Whenever I turned my head around, the sea greeted me with a gentle breeze. Go on, it seemed to say. Go on, perhaps you will find what you have been searching for. I doubted what the sea was telling me. As if Sea heard my thoughts, it gently echoed: Don’t worry. I will be here for you once you return. Go on.

I decided to trust the Sea’s words, and my leap of faith was rewarded in more ways than one.

I breathed in a sigh of relief. Slowly and tenderly stepping onto the first stone step, I looked up to marvel at what my eyes beheld. A large, white building, cool with the feeling of purity. So many rooms to explore, and an infinity of emotions to appreciate. I could hear some voices from inside, and the sound of water splashing onto soft pavement. I stepped in from heat, sun, torture. Dry, barren, cruel. I entered coolness, water, relief.

Walking ahead, I entered a dark room. The wrought iron windows allowed in the more benign of the sun’s rays. The nour created beautiful patterns that reflected on the water on the ground. Perched from the wall’s perimeters, a line of copper faucets. One woman was busy washing her face and arms as she muttered the name of the divine underneath her breath. She was cleansing her body before she engaged in prayer. 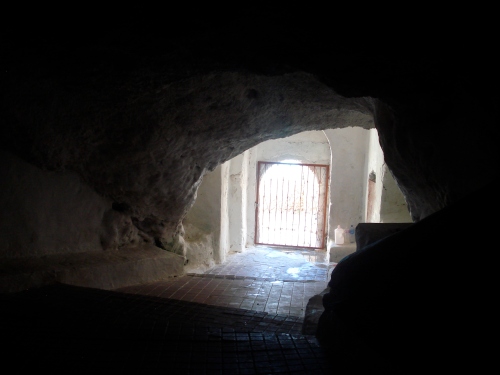 The voice of an older man was gracing the air as he read from the Qur’an in a room to my right. He was reading the words slowly, pronouncing each syllable delicately and carefully. He paused in between ayahs, or verses. In the silence between the verses, I listened intently to the sound of the breeze, which caressed each wall, each corner, as a whispered dedication caressing a lover. You could actually hear the gentleness and kindness that the breeze inflicted on the hearts of those present. Maybe it was the white walls – roughly cemented, the white paint the walls were drowned in reflected All. They reflected the intentions of those present.

Glancing ahead, I saw a young boy sitting on a step, underneath a wide arch, contemplating the encompassing sea. I felt like him and the Sea were one.

Perhaps the Sea thought of him, too.

As for me, I was just lost in the embrace of Ghar el-Melah.

From dancing a night away… To pillaging and burning.

Sometimes, issues hit closer to the heart not when you identify with a nationality, know a neighborhood, or speak a language. None of those abstract ideas that we go through pains to describe properly. Sometimes, things hit closer to the heart because of sheer silliness. Acts of sheer abandon that remain stuck in your memory forever. The acts of simply sharing good moments with good people – those are the acts leave an echo in your heart.

Seeing pictures of the “Marine House,” in the US Embassy in Tunis, burned and pillaged, afforded me this closer experience. It was only months ago that I attended a party in that very same building, and played pool on that very same table, which has been turned upside down in the video below (@ min 5:00).

It was on that very same terrace (@ min 5:36) that we enjoyed a nice burger with Heinz ketchup and classic yellow mustard (the things you pine for as an expat…). The same one that we merrily sang along to the Black Eyed Peas’ “Tonight’s gonna be a good night.” Carefree.

To see photos of that same area burned, pillaged, and looted somehow made it all the more real for me. I still have the phone number of the guard who helped my friends and I find a cab after the party – his watch area was burned down. That Tunisian employee, who had a family to feed, probably lost his job. This is more of a personal entry, yes –  and I want to so badly write out my more analytical thoughts about what’s happening. Perhaps I will tomorrow.

But Tunisia is not well. Not well at all. That’s all I will say for now.

My Trials and Tribulations with Civil Procedure

(No pun intended, of course.)

How do most ugly conglomerate corporations legally get off the hook? How do they get away with engaging in irresponsible behavior that negatively impacts neighborhoods and communities? With polluting, ransacking, and abusing? We’re not even talking MNCs here – we’re talking state-to-state, nation-bound corporations.

They use the law to their advantage. Read: their legal counsels cleverly find loopholes in state statutory law and federal law. Sometimes, they even find policy loopholes. They locate headquarters in tax-lax states such as Delaware, for instance. They find the secrets to absolve guilt through procedure – not through substance.

They master the art of civil procedure. They master the body of law that nobody (in his or her right mind) would like to hear about. What, you’re not turned on by Federal Rule 4(k)(2)(b)? They just do it. And then, they win (i.e. screw people over).

This is what I tell myself every time I open my civil procedure text book. Yet, every time I do so, my biology also seems to react – and I begin to partake in a yawning Olympics. It is as if I have quickly (in a matter of mere weeks!) developed an allergic reaction to the subject. I have never been allergic to anything. No food or material can throw my ever fabulously healthy immune system off balance. OK that’s a bit of an exaggeration. Somehow, still, civil procedure is my caveat.

I drink 3 cups of coffee then I finally start to read quickly and efficiently without falling asleep. But… How far can coffee go? Believe it or not, I do have a personally-set ceiling for the level caffeine allowed per day. And I cannot keep upping that ceiling. My body can only handle so much before I go insane. So what do I do?

For now, I have coined a mantra that I simply repeat to myself time and time again as I do my readings. “For Justice, know CivPro.” Not sure how accurate it is, but I do know that it’s keeping me going. One day, I would like to use the subject to fight for a Good case. Until then… I will keep calm and litigate on.